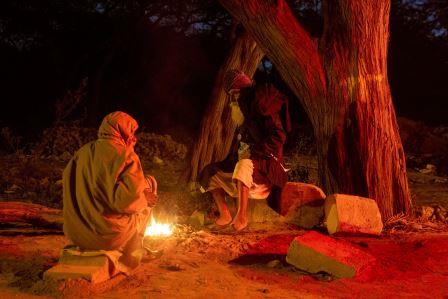 Farmers warm themselves on a cold winter morning at the site of a protest against new farm laws, at Singhu border, near New Delhi, India, December 21, 2020. REUTERS/Danish Siddiqui

NEW DELHI (INDIA) – Thousands of Indian farmers refuse to back down from their sit-in protests against the agricultural laws which is said to threaten their livelihoods. They have pledged to continue the protest despite the dropping temperature in the capital.

Farmers including a large number of elderly persons from the northern states of Punjab, Haryana and Uttar Pradesh and the desert state of Rajasthan endured temperatures below 2-3 degree Celsius, as they set up camp across prominent national highways for weeks demanding Prime Minister Narendra Modi’s administration to revoke the laws introduced in September.

“It’s very difficult to camp out in this weather, but we aren’t scared,” said Balbir Singh, an octogenarian from Punjab. “We won’t go back until our demands are met. Even if we have to die here, we will.”

Farmers stated that nearly 30 people have died since November, many of them due to the freezing weather and some were killed in road accidents as they participated in the protests at the borders of New Delhi.

“We don’t want more people to die in this protest, and I hope Modi and his government take back the laws soon,” Paagh Singh, 76, said, wrapped in a blue blanket. “It’s a democracy, and he (Modi) has to listen to us.”

With cold weather sweeping across the protest sites, protestors erected tents and tarpaulin-covered tractor trolleys, some of them had to spend the night sleeping in the open air as well.

“I don’t care how cold it gets,” said farmer Surminder Singh. “I’m neither scared of the cold nor of Modi. Our struggle will continue until the laws are withdrawn.”