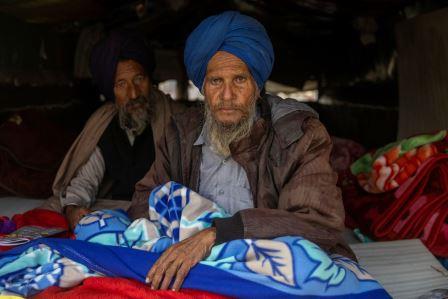 Farmer Paagh Singh, 76, sits inside his tractor trolley on a cold winter morning at the site of a protest against new farm laws, at Singhu border, near New Delhi, India, December 21, 2020. REUTERS/Danish Siddiqui

The federal government is exhorting farmers to take part in further discussions to put an end to a deadlock which has led to thousands camping on the outskirts of the national capital, New Delhi, for more than three weeks.

They have blocked road access to Delhi from the neighbouring states of Haryana and Uttar Pradesh, stalling public transport and the supply of fruit and vegetables.

“We are going on a 24-hour relay hunger strike, skipping meals, to press our demands of repealing three agricultural laws,” said Yogendra Yadav, one of the key leaders of the protests.

They exhorted supporters to forego one meal on Dec. 23 to express solidarity with the protests. Farmers fear the new laws could end state procurement of crops in a bid to help big retailers.

The prime minister has defended the legislations saying these would help enhance farmers’ income by encouraging more private investments in cold-stores, procurement and distribution.

“People should bang their utensils at home on Sunday when Modi speaks up on radio,” Jagjit Singh Dallewal, president of the Bharti Kisan Union, said.