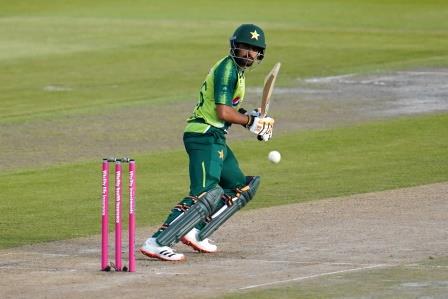 ISLAMABAD( PAKISTAN) – Because of a fractured thumb, Pakistan captain Babar Azam will not be part of the squad for the first test against New Zealand in Mount Maunganui from Dec. 26, said the Pakistan Cricket Board (PCB) on Monday.

The 26-year-old suffered the injury while practising in Queenstown last week and was excluded from the ongoing three-match Twenty20 series. Opening batsman Imam-Ul-Haq will also not be able to take part after fracturing his left thumb in a net session.

PCB said both players are being monitored closely by the team’s medical staff.

In the absence of Babar, Mohammad Rizwan will lead the side becoming the team’s 33rd test skipper.

“Although it will be nearly two weeks since Babar’s injury when the first test starts, it will be hard on him and the team to play him without any net sessions,” said head coach Misbah-ul-Haq.

“I remain confident and optimistic that other players will rise to the occasion in Mount Maunganui.”

For the first test, Pakistan have included uncapped batsman Imran Butt in their squad comprising 15 players.

The 24-year-old top-order batsman clocked 934 runs at an average of over 62 with four centuries and three half-centuries during the 2019-20 Quaid-e-Azam Trophy, which is the nation’s domestic first-class match.