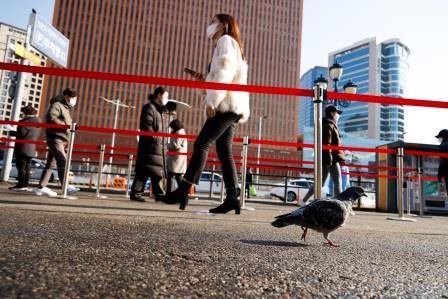 FILE PHOTO: A pigeon walks past people who wait in a line to undergo coronavirus disease (COVID-19) tests at a coronavirus testing site which is temporarily set up in front of a railway station in Seoul, South Korea, December 21, 2020. REUTERS/Kim Hong-Ji

SEOUL (South Korea) – In a bid to curb the spread of COVID-19, South Korea on Tuesday moved to shut down all ski resorts and winter tourist spots. The government will close ski facilities and tourist attractions from December 24 to January 3, said Prime Minister Chung Sye-kyun, through a television briefing.

These are popular destinations during the year-end season and with a third wave of the pandemic proving to be much tougher authorities are taking strict measures to contain its spread in the densely populated region of the capital city.

The PM asserted that gatherings of more than four people will not be permitted. Tighter rules will be imposed on restaurants to clamp down infections.

The announcement comes in the wake of South Korea hitting its highest death toll due to COVID on Monday. This also lead to Seoul and surrounding areas banning gatherings of more than four people over the Christmas and New Year holidays.

South Korea was upheld as the success story when it came curbing the spread of COVID. However, the sudden rise of new cases has shaken the country.

“The message the government is urging the people is clear,” Chung said. “We sincerely ask you to cancel all travels and gatherings and stay home during Christmas and New Year holidays.”