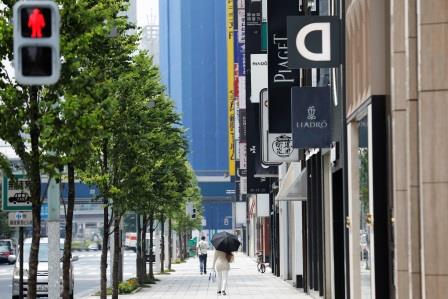 FILE PHOTO: A woman walks past at a shopping district, amid the coronavirus disease (COVID-19) pandemic in Tokyo, Japan August 17, 2020. REUTERS/Kim Kyung-Hoon

TOKYO (JAPAN) – The Japanese government led by PM Yoshihide Suga changed its view on consumption in December for the first time in three months. It said economic conditions were still severe because of the COVID pandemic.

According to authorities, the country is facing risks from a resurgence in coronavirus cases at home and abroad. This has led to an outlook downgrade though those remained underpinned by hopes for an economic rebound.

“The Japanese economy remains in a severe situation due to the novel coronavirus, but it is showing signs of picking up,” mentioned the government’s December economic report.

The report said “full attention” should be given to further risks from the pandemic and its growing impact on socio-economic activity, said a government official.

Among important economic elements, Suga’s government changed its evaluation of private consumption, which accounts for more than half of the country’s economy, for the first time since September. It said while the economy was picking up as a whole, some sectors such as domestic tourism were showing weakness.

The PM last week abruptly stopped a domestic subsidy programme over the year-end after the country witnessed a resurgence in infections.

The lower view on spending was caused by overall tourism conditions and the temporary halt of the campaign, said an official. He said he was hopeful that increased spending while staying at home over the year-end such as on food and movie streaming would bolster consumption.

Authorities changed their view on exports and output, saying a pickup was witnessed in volume terms especially in shipments of electronic parts to China. However, shipments of cars and transport equipment were less strong compared with last month.

The government altered its assessment on bankruptcies and of corporate profits, saying the rate of decline in profits has reduced.

It kept its description of capital spending unchanged to say it continued to decrease.

“Compared to 2018 and 2019, the drop (in capital spending) in the fourth quarter will be quite steep, after firms’ investment appetite disappeared,” the official said.

‘Glamping’ at airport is new travel plan in Singapore