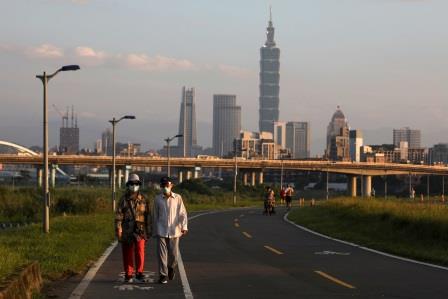 FILE PHOTO: People wear protective masks to prevent the spread of the coronavirus disease (COVID-19) while walking at the river path during sunset hour in Taipei, Taiwan, August 6, 2020. REUTERS/Ann Wang

TAIPEI (TAIWAN) – Taiwan reported its first locally transmitted case of COVID-19 since April 12. The case is a person who had come in contact with a pilot from New Zealand, who was confirmed as COVID positive a week ago after having flown flights to the United States.

Health Minister Chen Shih-chung informed that the new locally-transmitted case was a woman in her 30s. He added that the New Zealand national had not reported accurate details of all his contacts and list of places he had been, and may have violated Taiwan’s communicable diseases law.

The government has put out a list of places the person had been to in and around Taipei and informed people who may have been there to monitor their health. Around 167 people who have had direct contact with the new locally transmitted case is being tested.

Taiwan had adopted effective measures early on and has been successful in keeping COVID under control. Over the past 250 days all the new cases were restricted to travellers arriving on the island. With imported cases rising slowly the Taiwanese government has increased the alert levels.

Taiwan has reported a total of 771 cases, most of which were imported and seven deaths. Around 130 people remain in hospital for treatment.

The government had also announced that it would bring down the number of flights to Britain, to just one every week, after a highly infectious new coronavirus strain was found in the UK.

Those arriving in Taiwan from Britain, or who have been in Britain within the last 14 days, are required to quarantine for 14 days in centralised quarantine facilities.