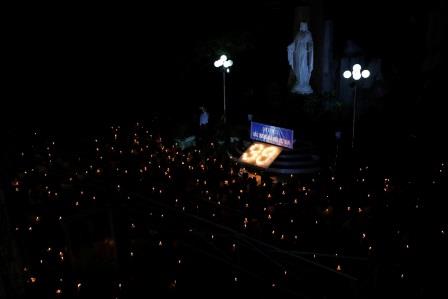 FILE PHOTO: Catholic believers hold lit candles during a mass prayer for 39 Vietnamese people found dead in a truck near London last month, at a church in Nghe An province, Vietnam November 30, 2019. REUTERS/Kham

LONDON (UK) – Two persons involved in the smuggling and manslaughter of 39 Vietnamese men, women and children were found guilty on Monday. The victims had suffocated to death in the back of a refrigerated van, as they were trying to enter the UK.

Eamonn Harrison, a 24-year-old truck driver from Northern Ireland, and Gheorghe Nica, 43, from Essex, were found guilty of 39 counts of manslaughter and one count of conspiracy to assist unlawful immigration, following a 10-week trial at England’s Central Criminal Court in London. They will be sentenced at a later date.

Most of those who died were aged between 44 to some as young as 15. The deaths shocked Britain and Vietnam, and has brought to light the illegal global trade that sends people from impoverished homes in Asia, Africa and the Middle East on dangerous journeys to the West.

As they were starved of oxygen in the back of the truck, some tried to escape while others used their mobile phones to bid farewell to their devastated relatives on the other end of the world.

“This is an unimaginably tragic case: 39 vulnerable people desperate for a new life were driven to put their trust in a network of unscrupulous people smugglers,” said Russell Tyner, a prosecutor in the Organised Crime Division.

“They died through lack of oxygen, desperately trying to escape from the container. Some were able to express their last words to their families on their mobile phones when they knew their situation was hopeless.”

Two of the smuggling team had overseen two similar journeys earlier that month.

“The men who were found guilty today made their money from misery,” said Ben Julian Harrington, the chief constable of Essex Police.