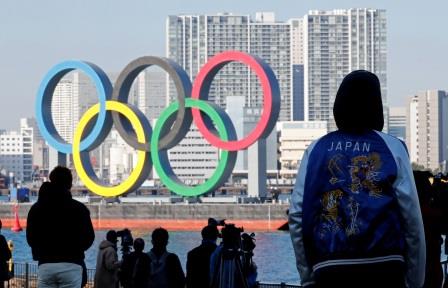 FILE PHOTO: Bystanders watch as giant Olympic rings are reinstalled at the waterfront area at Odaiba Marine Park, after they were temporarily taken down in August for maintenance amid the coronavirus disease (COVID-19) outbreak, in Tokyo, Japan December 1, 2020. REUTERS/Kim Kyung-Hoon/File Photo

TOKYO (JAPAN) – In an attempt to simplify the Olympics ceremonies, Tokyo Olympics officials on Wednesday announced a new creative team.

“Conditions are fairly tough… But, at this stage, honestly, progress isn’t being made yet,” Sasaki told a press conference, as his team is running on a tight schedule to overhaul plans for the ceremonies.

The Games scheduled to commence this summer was postponed by a year due to the pandemic . Since then, organisers and government officials have been looking at ways to cut costs, simplify the Games and safeguard athletes and spectators.

In a bid to contain the spread of COVID at next year’s games, organisers said they would spend $900 million on measures.

Sasaki stated that he envisions the ceremonies as an opportunity to show the world a message of “breakthrough or hope” during the pandemic.

COVID mutation: Japan to ban entry of non-Japanese from UK