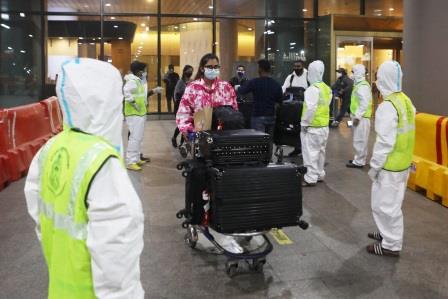 MUMBAI (INDIA) – In the wake of Indian authorities seeking to impose rules to halt the spread of a new more transmissible variant of the coronavirus, passengers who landed at major international airports in the country on Wednesday complained of long queues and confusion.

India has joined several other nations in suspending flights from Britain, where cases involving the new virus has spiked.

Passengers like Kamini Saraswat, who arrived from Britain before the ban came into force on Wednesday, had to undergo testes at New Delhi before midnight.

Inspite of booking a test in advance, she had to wait for nine hours to get tested after arrival. “There is no clear communication,” said Saraswat, 28. “There is no social distancing.”

Long queues of passengers could be seen near the testing kiosks.

State of Maharashtra, which is the hardest-hit in the country has resorted to additional measures, such as quarantining passengers arriving from Europe and the Middle East for a week.

Although most European and Middle Eastern countries have suspended flights from the UK, they allow transit passengers for big airlines flying into India.

Despite federal authorities stressing that all required steps will be taken, they gave few details on how the extra checks will be staffed.

Indian authorities will track down and screen all those who arrived from Britain since Nov. 25.

Immigration officials have been told to furnish details of travellers from Britain. State and district health officials will contact them.