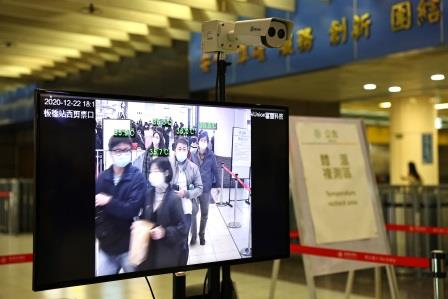 FILE PHOTO: People pass a temperature check while wearing protective masks to prevent the spread of the coronavirus disease (COVID-19) at a train station in Taipei, Taiwan, December 22, 2020. REUTERS/Ann Wang

TAIPEI (TAIWAN) – EVA Airways Corp of Taiwan has fired a New Zealand pilot whom the government has blamed for the island’s first locally transmitted case of COVID-19 since April 12, on Wednesday, as he failed to follow disease prevention rules.

For more than 250 days Taiwan was able to keep COVID under control. But the announcement of the domestic infection of a woman came as a jolt to the government on Tuesday. She is a friend of the New Zealand pilot whose infection was confirmed earlier this week after having to flown routes to the United States.

The infection of the pilot has sparked public debate, with one TV station calling him a “public enemy”. This came after the government said he failed to report all his contacts and the places he had been, adding that he did not wear a face mask in the cockpit.

A discipline committee had found the pilot had flouted government regulations, including the communicable disease transmission law, said the airline, adding that they had decided to sack him with immediate effect.

“However, the behaviour of an individual employee has undermined everyone’s efforts at epidemic prevention.”

The pilot is being treated in the hospital.

Earlier on Wednesday, Health Minister Chen Shih-chung, said 170 of the woman’s contacts had tested negative for the virus and three results are awaited.