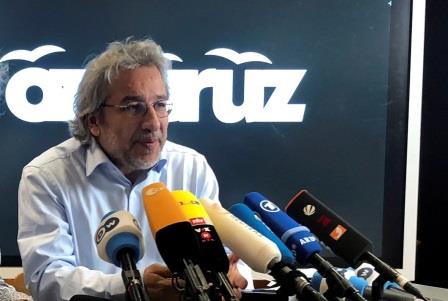 ANKARA (TURKEY) -A court in Turkey sentenced journalist Can Dundar in absentia to 27 years and six months in jail for espionage and helping a terrorist organisation, said his lawyers on Wednesday. They alleged the verdict was politically motivated.

The former editor-in-chief of Cumhuriyet newpaper, and a colleague, Erdem Gul, were awarded five years imprisonment in 2016 for publishing a video purporting to show Turkish intelligence shifting weapons into Syria. The duo was later released pending appeal.

Dundar now resides in Germany and his lawyers did not attend the final hearing. “We do not want to be part of a practice to legitimize a previously decided, political verdict,” they said in a written statement.

German Foreign Minister Heiko Maas flayed the ruling as a “hard blow against independent journalistic work in Turkey” which he termed a fundamental right.

“Journalism is not a crime but an indispensable service to society – even when it looks critically and investigatively on the fingers of those in power,” Maas told Redaktions Netzwerk Deutschland.

President Tayyip Erdogan’s critics consider Dundar to be a symbol of Turkey’s sweeping crackdown on press freedom, especially since a failed coup in 2016. However, the government says the judiciary is independent and that it is responds to threats facing the country.