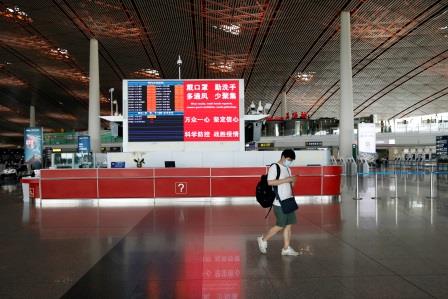 FILE PHOTO: A man wearing a face mask walks past a counter with a display showing flight information and a message on preventive measures against the coronavirus disease (COVID-19), at the departure hall of Beijing Capital International Airport after scores of domestic flights in and out of the Chinese capital were cancelled, in Beijing, China June 17, 2020. REUTERS/Carlos Garcia Rawlins

BEIJING (CHINA) – As countries across the globe shut their borders to the UK, China too is preparing to suspend all direct flights to and from the United Kingdom indefinitely, informed Wang Wenbin, a foreign ministry spokesman said on Thursday.

“After much consideration, China has decided to take reference from other countries and suspend flights to and from UK,” Wang told reporters at a daily briefing.

There are currently eight weekly flights between mainland China and the United Kingdom, according to aviation data provider Variflight, including one each by Air China, China Eastern Airlines and China Southern Airlines.