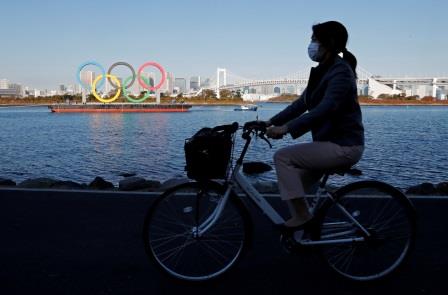 FILE PHOTO: A woman wearing a face mask rides her bicycle past giant Olympic rings being reinstalled at the waterfront area at Odaiba Marine Park, after they were temporarily taken down in August for maintenance amid the coronavirus disease (COVID-19) outbreak, in Tokyo, Japan December 1, 2020. REUTERS/Kim Kyung-Hoon/File Photo

TOKYO (JAPAN) – With the Tokyo Olympics getting postponed by a year, all the 68 domestic sponsors for the Summer Olympics has agreed, in principle, to extend their contracts, organisers said on Thursday.

“Partner companies told me about the difficult situation they are in because of the pandemic,” Tokyo 2020 President Yoshiro Mori told a news conference.

“But they also told me they definitely want the games to be held, and that they are willing to offer as much support as they can.”

The domestic sponsors include companies hit by a sharp fall in travel demand amid the pandemic, such as Japan Airlines Co Ltd and All Nippon Airways Co Ltd.

Though Prime Minister Yoshihide Suga has repeatedly said that he is determined to hold the Olympics as a proof that humanity has defeated the virus, recent Japanese newspaper polls show that two-thirds of the public believe the games should be postponed again or cancelled altogether.