Erdogan pledges to introduce reforms to break ‘triangle of evil’ 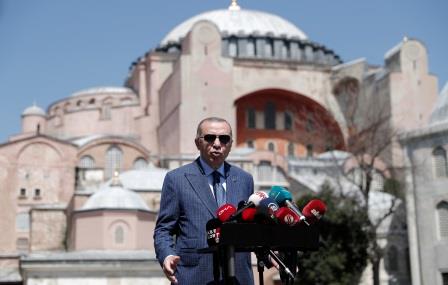 ANKARA (TURKEY) – Turkish President Tayyip Erdogan pledged on Saturday to introduce structural reforms to break the “triangle of evil” comprising interest rates, inflation and exchange rates. He said Ankara would come out with a system based on production and employment.
Last month, the president had vowed to bring in judicial and economic reforms and that sparked expectations of the release of politicians, including Kurdish ones, and human rights advocates, from prison. But it has been met with sceptisim after his recent statements on court rulings and criticism of his government.
Addressing a ceremony via videolink, he said 2021 would be “the year of democratic and economic reforms” and that efforts to present the reforms to parliament would move “as soon as possible”.
“We hope to overcome troubles from economic attacks and the pandemic measures as soon as possible. By speeding up structural reforms, we are determined to form a system based on production and employment and breaking the interest rates, inflation and exchange rates triangle of evil,” Erdogan said.
“We are not carrying out democratic reforms because anyone forced us to, but because our people deserve them,” he added.
The president has termed interest rates the “mother of all evil” and said he believed high rates of interest led to inflation. He has portrayed the economic troubles of the nation as the result of foreign attacks.
On Thursday, the central bank of the country increased its interest rates by 200 basis points to 17% in a bid to mitigate double-digit inflation and boost its credibility under new governor Naci Agbal.