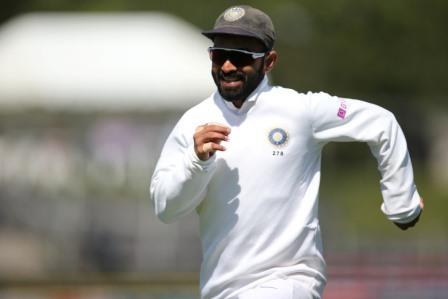 MELBOURNE (AUSTRALIA) – While skipper Kohli has returned home after the calamitous defeat in Adelaide, India under the captaincy of Ajinkya Rahane bowled Australia out for 195, to dominate the opening day of the second test at the Melbourne Cricket Ground.

Australia won the toss and elected to bat. Jasprit Bumrah took four wickets and seamer Mohammed Siraj grabbed two. With the wounds still raw from India’s humiliating defeat for 36 at Adelaide Oval the focus shifted quickly to their batsmen and how they would fare against Australia’s fast pace attack.

Agarwal, succumbed to the pressure and was out lbw on the sixth ball of the innings paceman Mitchell Starc fired down on him.

Gill, replacing the dropped Prithvi Shaw, was lucky not to follow him, getting a reprieve on four when Marnus Labuschagne grassed a regulation catch in the slips off the bowling of Pat Cummins. Gill, however, was able to steer India out of another disappointment.

“We’re not looking too far ahead,” Bumrah told reporters. “We don’t want to be conservative in our mindset. “Not being reckless but being confident … that is the motive going forward now,” he added.

Spinner Ravichandran Ashwin (3-35) did early damage with two wickets including that of Australia’s star batsman Steve Smith for a duck.

Having dismissed him for one in Adelaide, Ashwin condemned Smith to his first duck since 2016 when he was out lbw by Keshav Maharaj in defeat to South Africa in Perth.

Reeling at 65 for three at lunch, Australia rallied with an 86-run partnership between Labuschagne and Travis Head, but neither could go on with it.

Bumrah had Head caught in the gully by Rahane for 38 before Siraj, held back until after lunch, savoured his first test wicket when Labuschagne was pouched for 48 by Gill at backward square leg.

There was a moment of controversy with Tim Paine surviving a line-ball run out decision after the tea-break, but the Australia skipper was unable to make India pay, being caught in close off the bowling of Ashwin for 13.

Siraj had young all-rounder Cameron Green out lbw for 12 before Bumrah and recalled all-rounder Ravindra Jadeja combined to wrap up the tail after some lusty slogging from Nathan Lyon (20).

“I think we had probably three innocuous dismissals,” he told reporters.

“I think we’re in the game, I think we certainly showed in the last game it doesn’t matter how many (runs) you have.”

Erdogan pledges to introduce reforms to break ‘triangle of evil’

Erdogan pledges to introduce reforms to break 'triangle of evil'