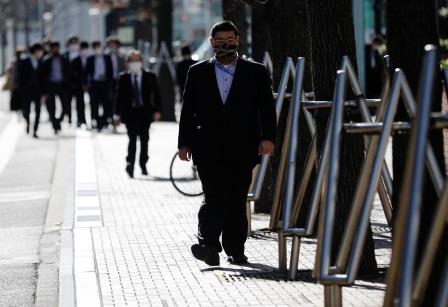 FILE PHOTO: An office worker wearing a protective mask makes his way during a lunch hour at a business district, amid the coronavirus disease (COVID-19) outbreak, in Tokyo, Japan December 25, 2020. REUTERS/Kim Kyung-Hoon

TOKYO (JAPAN) – There will be a temporary ban on non-resident foreign nationals from entering the country, informed Japan on Saturday. The country has tightened its borders following the detection of a new, highly infectious variant of the coronavirus on Friday.

The ban will take effect from Dec. 28 and will run through January, the government said in an emailed statement.

Japanese citizens and foreign residents will be allowed to enter but must show proof of a negative coronavirus test 72 hours before departing for Japan and must quarantine for two weeks after arrival, the statement said.

The first cases of the fast-spreading variant entered Japan through a passengers arriving from Britain. The new variant has also been detected in a man who visited the UK and a family member – the first cases of infected people found outside airport checks, reports stated.

The new strain adds to worries about a surge in cases as Tokyo reported another record rise on Saturday.

Serious cases have remained unchanged from a day earlier at 81.