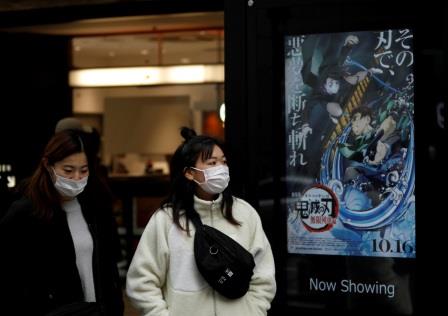 The movie which tells the story of a boy fighting human-eating demons that murdered his family, is based on a popular manga and television anime series. It’s collection has crossed “Spirited Away”, the mega-hit Academy Award-winning movie by Studio Ghibli’s Hayao Miyazaki that opened in 2001, in just a little over two months.

According to data released on Monday, “Demon Slayer”, with a full official title ‘Kimetsu no Yaiba the Movie – Mugen Train’, has raked in 32.47 billion yen compared with 31.68 billion yen for “Spirited Away”.

The film got an unexpected boost due to the pandemic, film industry watchers said.

People stuck at home because of social distancing got hooked on the manga comic and television series then rushed to watch the film when cinemas reopened.

The film, with its message of resilience, has also spawned a bonanza of merchandise – from toys to canned coffee – generating at least 270 billion yen($2.61 billion) in business as of Dec. 3, said Toshihiro Nagahama, senior economist at the Dai-Ichi Life Research Institute.

Sony Corp, whose music unit is co-distributor, also got a boost from the film, which has opened in several Asian countries and will head to the United States and Canada early in the New Year.