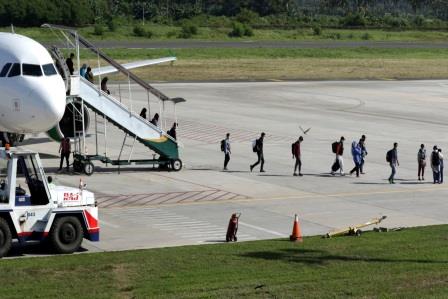 JAKARTA (INDONESIA) – Indonesia has barred International visitors from entering the country for a two-week period, in an attempt to keep out the new variant of coronavirus, informed foreign minister Retno Marsudi on Monday.

The new regulation, effective from Jan. 1, comes days after Indonesia banned travelers from the Britain and tightened rules for those arriving from Europe and Australia.

It announced 5,854 new infections and 215 deaths on Monday, with the positivity rate above 20% in recent days.

In recent weeks Indonesia’s healthcare system has come under strain with hospitals on Java island forced to add more beds as emergency wards near capacity.

In West Java, Indonesia’s most populated province, hospital occupancy is currently at 83%, and in East Java, 77%, he said.

“This means that these regions are in the red zone. The bed capacity is now in red zone. Any uptick will overwhelm hospitals,” he said, adding that 500 beds would be added in the greater Jakarta area.