India prolongs suspension of flights with UK until Jan. 7 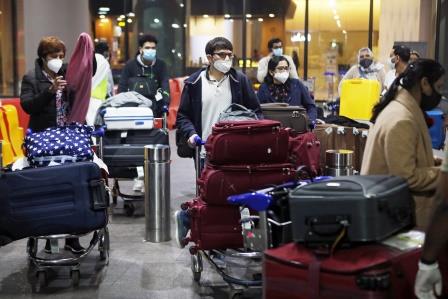 FILE PHOTO: Passengers wearing protective face masks wait to exit upon arrival at Chhatrapati Shivaji Maharaj International Airport after India cancelled all flights from the UK over fears of a new strain of the coronavirus disease (COVID-19), in Mumbai, India, December 22, 2020. REUTERS/Francis Mascarenhas

BENGALURU (INDIA) – Suspension of flights between India and Britain has been prolonged until January 7, said New Delhi’s civil aviation minister. This comes as the nation recorded 20 cases of the new mutant variant of the virus which was first detected in the UK.

“Thereafter, strictly regulated resumption will take place for which details will be announced shortly,” Hardeep Singh Puri said in a tweet.