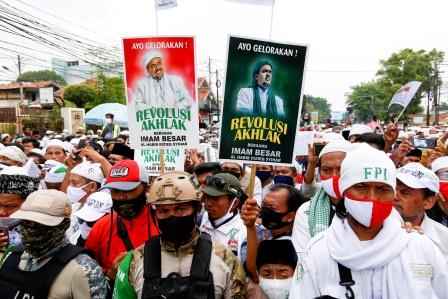 FILE PHOTO: People gather for the homecoming of Rizieq Shihab, the leader of Indonesian Islamic Defenders Front (FPI) who has resided in Saudi Arabia since 2017 in Jakarta, Indonesia, November 10, 2020. REUTERS/Ajeng Dinar Ulfiana

“The government has banned FPI activities and will stop any activities carried out by FPI,” Mahfud said. “The FPI no longer has legal standing as an organisation.”

The ban follows the November return of the group’s spiritual figurehead, Rizieq Shihab, from three years of self-exile in Saudi Arabia, which was celebrated with events attended by thousands.

Rizieq’s return to the world’s largest Muslim-majority country had fuelled concern within government that he could be angling to harness opposition forces.

The 55-year-old cleric was arrested this month and charged with violating health protocols and remains in custody, while a clash between police and his supporters – in which six of his bodyguards were shot dead – is being investigated by the national human rights body.

Mahfud said the FPI had officially been disbanded since June last year, but had continued unlawfully conducting activities.

Six senior government officials, including the attorney general, police chief and counter-terrorism agency head were involved in the decision to ban the group, he said.

The deputy justice minister, Edward Omar Sharif Hiariej, said the FPI was outlawed because nearly 30 of its leaders, members and former members had been convicted on terrorism charges, and because the group conflicted with the nation’s state ideology, Pancasila, which emphasises unity and diversity.

Formed soon after the 1998 fall of former strongman Suharto, the FPI were notorious for raiding bars and brothels and intimidating religious minorities. It is also known for offering assistance during natural disasters.

Its political sway has risen in recent years, particularly after its role in protests in 2016 against Jakarta’s former Christian governor who was jailed for insulting Islam.

The government saw the demonstrations as one of the biggest threats to President Joko Widodo’s rule.

Dr Ian Wilson, senior lecturer in politics and security studies and a research fellow at the Asia Research Centre, Murdoch University, said the ban may prove to be counterproductive.

“Banning the FPI will do little to mitigate the factors that have driven its popularity as a social phenomenon, and is likely to ‘radicalise’ some members and sympathisers,” he said.

The ban raised questions about enforcement and the implications for democratic expression in the world’s third-largest democracy, he said.

Wilson said the decision had to be viewed in the context of recent political developments, including the purging of FPI members and sympathisers from the Indonesia Ulema Council.

“The government is on the offensive against what they see as a potential locus of popular Islamist opposition, sharpened by the recent return of Rizieq,” he said.

“While having a sound legal foundation, the banning is clearly politically driven as well.”

Security analysts have suggested the ban could spark a backlash or force the FPI and its activities underground.

“They can disband FPI but they cannot disband our struggle to defend the country and religion. And if we want, this afternoon we can declare a new Islamic mass organisation,” he said,

“If they disband it again, we’ll create a new one.”