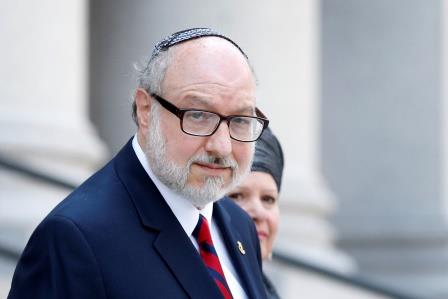 JERUSALEM (ISRAEL) – A former US Navy analyst, who was jailed for three decades for conducting espionage for Israel, moved there on Wednesday where he was hailed by Prime Minister Benjamin Netanyahu with a prayer service.

The ex-Navy analyst Jonathan Pollard, 66, had long expressed a wish to emigrate to Israel, which had granted him citizenship. The espionage affair had rocked the relations between Washington and Tel Aviv for decades.

He was sentenced to life imprisonment in 1987 after he pleaded guilty to conspiracy to commit espionage. However, he was freed on parole five years ago.

The decision of the US Justice Department in November to allow the parole terms’ five-year travel curb go unrenewed was seen by analysts as the Trump administration’s parting gift to Israel.

As Pollard and his wife, Esther, disembarked at Tel Aviv, they were welcomed by Netanyahu. The couple, both Orthodox Jews, kissed the tarmac upon arrival.

After a prayer of thanksgiving for the liberation of prisoners in Hebrew, Netanyahu presented Pollard with an Israeli identity card. “Welcome home,” he said. “Now you are a citizen of the State of Israel.”

As per the Israel Hayom newspaper, which first carried news about the arrival of the duo, they flew in on a private aircraft because of Esther’s medical condition.

LCD production extended for an unspecified period by Samsung Display

China’s Ant group to strictly comply with all regulatory requirements

China's Ant group to strictly comply with all regulatory requirements