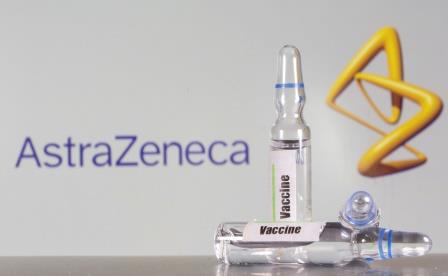 FILE PHOTO: A test tube labelled with the Vaccine is seen in front of AstraZeneca logo in this illustration taken, September 9, 2020. REUTERS/Dado Ruvic/Illustration

TAIPEI (TAIWAN) – The Taiwan government said on Wednesday that it would buy 20 million doses of the coronavirus vaccine, including 10 million from AstraZeneca Plc, adding that the first case of the new mutant variant of the virus has been confirmed.

The island has kept the infection well under control because of early and effective preventive steps and strict quarantine. Imported cases account for all of the 798 infections so far, including the seven fatalities.

The Central Epidemic Command Centre said apart from AstraZeneca, it would purchase 4.76 million doses from global vaccine programme COVAX. The first set of shots is slated to arrive in March, it said.

Soon after the announcement by Taiwan, the AstraZeneca shot, which is being jointly developed with Oxford University, was approved by the British regulator on Wednesday.

The democratic island plans to procure 30 million vaccine doses to cover 65% of its population, said the centre.

According to Taiwan Health Minister Chen Shih-chung, authorities have confirmed the island’s first case of a new coronavirus variant, which was first discovered in the UK.

The victim is in a stable condition in hospital after he arrived from the UK on Sunday, the minister told media persons.