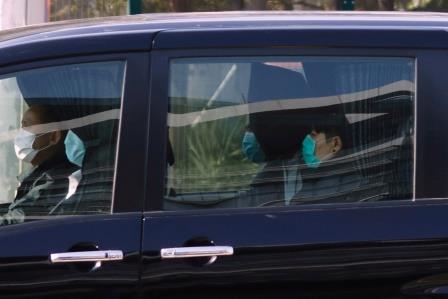 One of the 12 Hong Kong activists detained in mainland China over an illegal border crossing is seen in a vehicle after a transfer conducted at the China-Hong Kong border of Shenzhen Bay Port , in Hong Kong, China December 30, 2020. REUTERS/Tyrone Siu

SHENZHEN (China) – A Chinese court sentenced 10 Hong Kong activists to between seven months and three years in jail on Wednesday for illegally crossing the border, in a case that has drawn international attention and concern over the defendants’ treatment.

The group had all faced charges in Hong Kong over anti-government protests in the Chinese-ruled city and they have been held virtually incommunicado in a mainland prison since their boat was intercepted on Aug. 23 after leaving Hong Kong, allegedly en route to the democratic island of Taiwan.

The court in the city of Shenzhen, which borders the semi-autonomous former British colony of Hong Kong, found eight of the defendants guilty of the illegal crossing and sentenced them to seven months in jail and a 10,000 yuan ($1,533) fine.

Tang Kai-Yin, 31, and Quinn Moon, 33, were found guilty of organising an illegal border crossing and sentenced to three years and two years, respectively, with fines of 20,000 and 15,000 yuan. The court said the pair had acted under the instruction of others, suggesting more arrests could follow.

The defendants’ family-appointed lawyers, who were denied access to their clients, rights groups and relatives criticised the legal process.

“We have to remember that they were locked up in China cut off from the world, their families and lawyers of their choosing for four months before attending a mock trial where only CCP-approved players were allowed in,” said Beatrice Li, the sister of Andy Li, 30, who was among those jailed, referring to the Chinese Communist Party.

Rights group Amnesty International expressed concern over the safety of the defendants in the mainland prison system.

“This group of young Hongkongers will be at risk of torture and other ill-treatment in Chinese jails,” the group’s Asia-Pacific regional director, Yamini Mishra, said in a statement.

All 10 had pleaded guilty to their crimes, the court said. The defendants all appeared for the verdicts and were taken away afterwards.

Their government-appointed lawyers were not available for comment. A Shenzhen public security bureau spokesman said the sentences would take into account the time the 10 had already spent in detention.

Two minors who were among the 11 males and one female – aged 16-33 at the time of their detention – had pleaded guilty to illegal border crossing and would not be charged, the prosecutor said.

After the verdicts were announced, Hong Kong police said that the two youngest of the group, now aged 17 and 18, had been handed over and would appear in court in the financial hub after completing quarantine for coronavirus.

“Hong Kong police want to reiterate the seriousness of absconding; society will not tolerate criminals who are waiting for court hearing but choose to abscond,” said Cheng Lai-ki, acting chief superintendent of the commercial crime bureau.

The 10 who were sentenced could face additional charges on their return to Hong Kong, she added.

The scene outside the court was quiet, with few media present. Diplomatic representatives from countries including the United States, Britain, Canada and Australia, were not allowed to enter the hearing at Yantian District People’s Court on Monday after authorities said the court was full.

A Reuters reporter and other media were also denied entry.

Security was tight as police checked media accreditation, asked reporters if they had arranged interviews and urged them not to linger in the vicinity due to the coronavirus.

Self-ruled Taiwan is a popular destination for Hong Kong pro-democracy activists since Beijing imposed a national security law on its freest city in June that critics say is aimed at stamping out dissent and curbing freedoms.

Hong Kong returned to Chinese rule in 1997 with the guarantee of freedoms not seen on the mainland, including freedom of speech and assembly. Democracy activists complain that Communist Party rulers in Beijing are whittling away at those freedoms, a charge Beijing rejects.

The United States and European Union have called for the 12 to be released and allowed to return to Hong Kong.