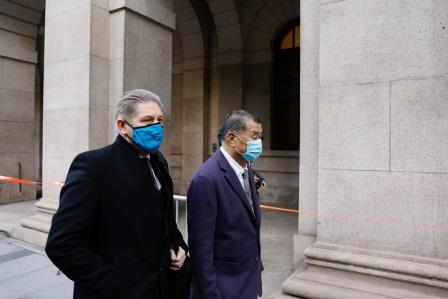 Media mogul Jimmy Lai, founder of Apple Daily, arrives the Court of Final Appeal, for hearing an appeal by the Department of Justice against the bail decision of Jimmy, in Hong Kong, China December 31, 2020. REUTERS/Tyrone Siu

HONG KONG – Hong Kong’s top court ordered media tycoon Jimmy Lai back into custody on Thursday, saying a judge may have erred in a decision to release him on bail. Lai is the most high-profile person to be charged under the city’s national security law.

The Court of Final Appeal’s ruling comes a week after Lai, one of Hong Kong’s most prominent democracy activists who is accused of colluding with foreign forces, was released on HK$10 million ($1.3 million) bail along with extensive restrictions that included barring him from using social media.

Lai, a critic of Beijing who had been a frequent visitor to Washington, is widely believed to be a target of the new legislation.

Prosecutors have accused Lai of breaching the security law over statements he made on July 30 and Aug. 18, in which they allege he requested foreign interference in Hong Kong’s affairs.

In the earlier bail ruling, a High Court judge said Lai’s remarks appeared to be “comments and criticisms” rather than a request for interference.

But on Thursday, the judges questioned that earlier assessment.

“We consider it reasonably arguable in the present case that the learned judge may have erred,” the judges said in their ruling, referring to Article 42 of the security law.

Outgoing Chief Justice Geoffrey Ma, Andrew Cheung, who replaces Ma as the city’s most senior judge in January, and Roberto Ribeiro presided over the hearing.