‘No need to panic,’ Chinese official says of COVID variants 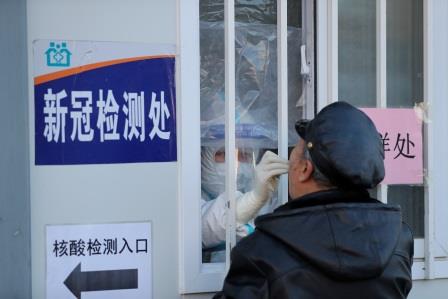 FILE PHOTO: A medical worker in protective suit collects a swab from a man for nucleic acid testing at a hospital following new cases of the coronavirus disease (COVID-19) in Shenyang, Liaoning province, China December 31, 2020. cnsphoto via REUTERS

BEIJING (CHINA) – There is no indication that the new coronavirus variants will affect the immune impact of a vaccine that China has just authorised for public use, said a disease control official.

The shot by an affiliate of state-backed company Sinopharm was approved on Thursday, the day after news of China’s first imported case of a variant spreading in Britain. [L1N2JB039]

“No need to panic,” Xu Wenbo, an official at the Chinese Center for Disease Control and Prevention (CDC), told state TV.

He said no impact of variants on the vaccine’s immune effect had been detected.

The variant which British scientists have named “VUI – 202012/01” includes a genetic mutation in the “spike” protein, which could theoretically result in easier spread of COVID-19.

Xu added that mutation in the virus’ protein would not effect the sensitivity of most Chinese-made COVID-19 tests that target the virus’ nucleic acids, which carry genetic information.