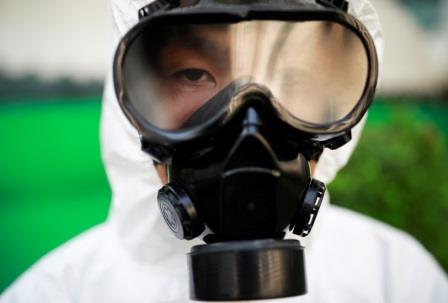 FILE PHOTO: A medic wearing a protective suit and a face mask is pictured at a mobile laboratory for coronavirus disease (COVID-19) testing in Bangkok, Thailand, April 9, 2020. REUTERS/Soe Zeya Tun

BANGKOK (THAILAND) – With the number of new COVID cases on the rise health authorities on Saturday recommended tougher restrictions on businesses and people’s movement in 28 provinces, including the capital Bangkok. Thailand on Saturday confirmed 216 new coronavirus cases and one new death.

The measures, which need final approval from Prime Minister Prayuth Chan-ocha, include suspending some businesses and crowded activities that pose infection risks to the public, while recommending people in these provinces work from home and avoid unnecessary travel out of their province.

Authorities in Bangkok had earlier ordered the closing down of schools for two weeks and the temporary closure of daycare centres, gyms, bars and massage shops.

Thailand has managed to keep infection rates relatively low since the initial outbreak of the coronavirus disease last year, keeping the number of new cases in the single-digits for months until mid-December.

Now, in a second wave, many cases are linked to a cluster among migrant workers in Samut Sakhon province south of Bangkok. Another cluster is linked to illegal gambling dens in eastern Thailand, both of which started in mid-December.

The country has recorded a total of 7,379 coronavirus cases and 64 deaths since the outbreak started last January.

“This new round of outbreak that we are closely watching is in Bangkok which started to spread to many areas and there have been deaths that are not linked to previous cases, making it more difficult to control,” Taweesin Wisanuyothin, a spokesman for the government’s COVID-19 task force, said at a news conference.

Taweesin said with the prime minister’s approval, the new measures would start to come into effect on Monday and could be implemented until the end of January.