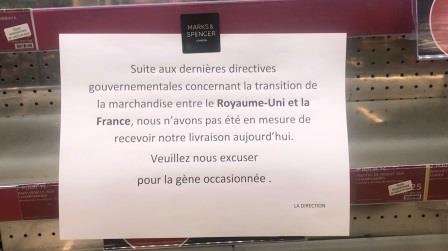 FILE PHOTO: A video screenshot shows a sign reading "Following the government's latest instructions regarding the movement of goods between the United Kingdom and France, we were not able to receive our delivery today. We apologize for the inconvenience." on empty shelves at a Marks&Spencer store in Paris, France January 4, 2021. REUTERS/Stringer

PARIS (FRANCE) – With new trade rules in place after Brexit British retailer Marks & Spencer said deliveries of some fresh food to its stores in France were delayed. At least three branches had empty shelves on Tuesday which included items such as sandwiches, black rice and edamame bean salad, and turkey tortilla with curry.

As of Jan. 1, goods travelling back and forth between Britain and the EU are subject to customs and other bureaucratic hurdles that did not previously exist.

Marks & Spencer ready-meals are popular in Paris because they cater for a market for fresh meals to eat on the go that is underserved in France.

The company and its franchise-holders operate 20 food stores in France, all but one of them in Paris, according to the company’s website.

At the Marks & Spencer store in a shopping centre in the Porte Maillot district of western Paris, fresh salads were out of stock. A sign said that because of new trade rules, “we have not been able to receive our delivery today.” Fresh salads and pasta dishes were out of stock at a second store, on Franklin Roosevelt Avenue near the Champs Elysees.

Shelves of ready-to-eat fresh food were empty at a third branch, on Boulevard Montmartre in central Paris.

A spokeswoman for Lagardere, the French firm which holds the franchise for some of the stores in France, said it was working with M&S on the supply disruptions and expected the problems to be fixed by the end of January.

Journalists jailed in Vietnam for ‘propaganda’