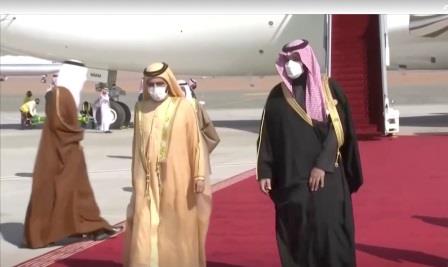 AL-ULA (SAUDI ARABIA) – The Gulf summit this year will focus on ending a long-standing dispute with Qatar which lead to the disruption of Gulf unity at a time of heightened regional tensions with Iran. Gulf Arab leaders arrived in Saudi Arabia on Tuesday to attend the summit.

Ahead of the gathering, Kuwait announced that Saudi Arabia, which along with allies had boycotted Doha in mid-2017, would reopen its airspace and borders to Qatar

Under the emerging deal, Qatar will suspend lawsuits related to the boycott, the official said.

The breakthrough is the latest in a series of Middle East deals sought by Washington in a bid to built a united front against Iran.

All of the states are U.S. allies. Qatar hosts the region’s largest U.S. military base, Bahrain is home to the U.S. Navy’s Fifth Fleet, and Saudi Arabia and the UAE host U.S. troops.

Alibaba to shutdown its music streaming app next month

Egypt’s foreign minister to participate in the Gulf summit

Egypt's foreign minister to participate in the Gulf summit