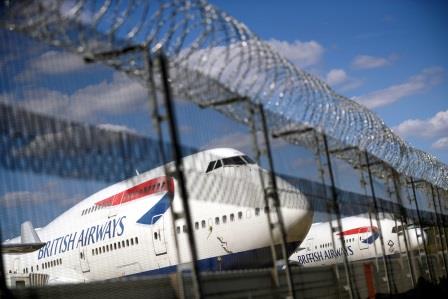 LONDON (UK) – With reductions to already low levels of flying almost certain UK-based airlines British Airways and easyJet said they were reviewing their plans in response to new lockdowns rules.

Only a fraction of flights are currently operational owing to restrictions on travel due to the pandemic, and particularly a halt by some countries to passenger traffic from Britain due to the outbreak of a new variant of the coronavirus.

Although carriers had hoped for a recovery in travel by the spring the new lockdown in England stops most people from travelling abroad, making more cuts likely, and putting airline finances under renewed pressure.

Goodbody analysts said the lockdown would wipe out income from the school half-term holiday in February, usually a strong travel period, and risked impacting bookings for Easter and summer.

To survive this long, airlines have already had to cut thousands of staff and raise new debt and equity. Last year, British Airways said it needed to axe 13,000 staff, while easyJet went ahead with 4,500 job cuts.

In response to the new lockdown, easyJet, which in December had been flying about 20% of its 2019 capacity, once again called for more government help for aviation.

“Given the ongoing impact of the pandemic on travel, we continue to call for sector specific support such as has been provided to hospitality,” the airline said in its statement.

Travel industry bodies Airlines UK and the Airport Operators Association have previously called on Britain to waive the air passenger duty tax amongst other measures.

Before the pandemic, Britain had a thriving aviation sector. Air transport and related supply chain activity plus tourist arrivals supported 1.6 million jobs and accounted for 4.5% of UK GDP according to an IATA study.

British Airways, owned by IAG, said on Tuesday that its focus was on keeping some air links open to transport vital goods