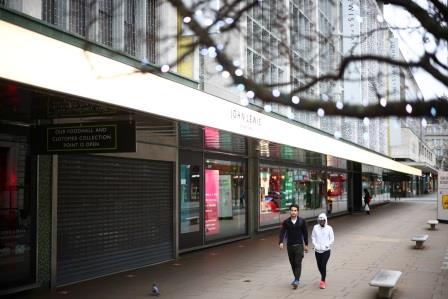 LONDON (UK) – With large service sector failing to fully recover after the crippling November lockdown, Britain’s economy made only a subdued return to growth in December, a survey showed on Wednesday.

The IHS Markit/CIPS composite Purchasing Managers’ Index (PMI) rose to 50.4 in December from 49.0 in November, a slightly smaller increase than in an earlier flash estimate.

The services PMI, which makes up the largest part of the composite index, remained below the 50 mark which separates growth from contraction at 49.4. This was up from November’s five-month low of 47.6 but also below the flash reading.

December had brought about some optimism to British businesses with vaccine roll out.

“December data confirm that the UK service sector has swung back into decline after the partial rebound seen during the third quarter of 2020, largely reflecting tighter restrictions on consumer services amid the worsening trajectory of the pandemic,” IHS Markit economics director Tim Moore said.

Businesses are more optimistic about the outlook, with the index for future output only a fraction lower than November’s five-year high.

With the new variant of COVID, Prime Minister Boris Johnson has set out a new, tougher lockdown. Economists think this will tip Britain back into recession as the lockdown may last until at least mid-February.

“Service providers will be braced for a sustained period of subdued UK economic conditions and deferred client spending in the first quarter of this year,” Moore said.

The economic damage is not expected to be on the scale of the first lockdown, when economic output slumped as much as 25%.

But a survey from the British Chambers of Commerce, released late on Tuesday, showed many businesses not directly affected by lockdown restrictions reported a drop in sales during November’s lockdown as their clients suffered cashflow difficulties.

China ramps up restriction near Beijing