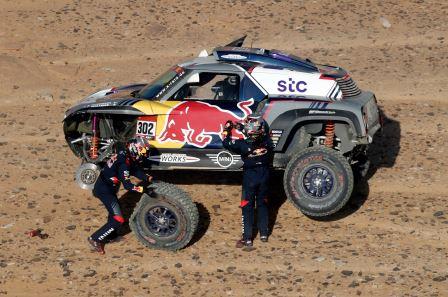 The veteran, who also goes by ‘Mr Dakar’, has won the event a record 13 times on two wheels and four but has yet to take a stage this year. The Toyota driver ended the fourth day of action four minutes and 58 seconds adrift of Peterhansel.

Despite his speed, Al-Attiyah clawed back only 11 seconds from the consistent X-Raid Mini driver who finished second on the 337km stage from Wadi Ad-Dawasir north to the Saudi capital Riyadh.

“We’re not marking one another, it’s just one relentless attack after another,” said Peterhansel of the battle to stay ahead.

“Apart from a small navigation error near the finish, I don’t think I can attack much more.”

Spaniard Carlos Sainz, Peterhansel’s team mate and the defending champion, climbed back to third overall but 36 minutes off the lead.

In the motorbike category, France’s Xavier de Soultrait took the lead for Husqvarna with Spaniard Joan Barreda 15 seconds behind after winning the stage.

“I started very far back because of my result yesterday, but that’s the way it is in this Dakar, you’re either at the front or far back,” said Barreda, who also won on Monday but dropped to eighth overall on Tuesday.

Russian Dmitry Sotnikov, in a Kamaz, took his third stage win in the truck category to extend his lead.