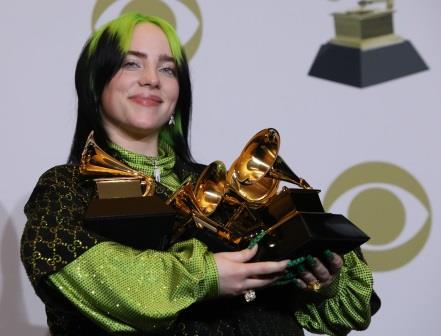 FILE PHOTO: 62nd Grammy Awards – Photo Room– Los Angeles, California, U.S., January 26, 2020 – Billie Eilish poses backstage with her awards to include Song of the Year for "Bad Guy" , Best New Artist, and Album of the Year for "When We All Fall Asleep, Where Do We Go?". REUTERS/Monica Almeida

LOS ANGELES (US) – The Grammy Awards ceremony which was due to take place on Jan. 31 has been rescheduled to be held on March 14 because of COVID spike in Los Angeles, organizers said on Tuesday.

Organizers informed that decision to delay it was made after talks with health experts and musicians.

“After thoughtful conversations with health experts, our host and artists scheduled to appear, we are rescheduling the 63rd Annual GRAMMY Awards® to be broadcast Sunday, March 14, 2021,” the statement said.

“The deteriorating COVID situation in Los Angeles, with hospital services being overwhelmed, ICUs having reached capacity, and new guidance from state and local governments have all led us to conclude that postponing our show was the right thing to do,” it added.

The new date, announced by the Recording Academy and broadcaster CBS in a joint statement, clashes with the Screen Actors Guild (SAG) Awards ceremony for film and television.

The SAG-AFTRA union, which represents actors, journalists and performers, said the date for SAG Awards was announced in July and that they were “extremely disappointed” with the event clashing with the Grammy’s.

This years nominations is led by Beyonce, with nine nods in a November announcement. However, the Recording Academy is yet to announce who would be performing at the show.