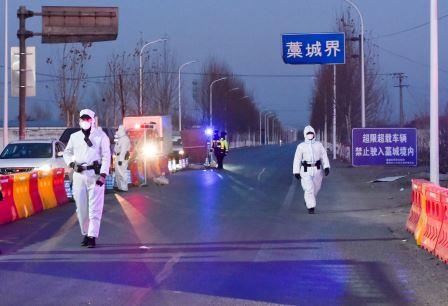 Police officers and staff members in protective suits inspect vehicles at a checkpoint on the borders of Gaocheng district on a provincial highway, following the coronavirus disease (COVID-19) outbreak in Hebei province, China January 5, 2021.China Daily via REUTERS

SHANGHAI (CHINA) – Chinese authorities on Wednesday cordoned off sections of highways running through Hebei province that surrounds Beijing. In an effort to control yet another coronavirus wave authorities also banned gatherings in the province’s capital.

With Mainland China recording 20 out of 23 new cases as locally transmitted on Jan.5, the province went into a “wartime mode” on Tuesday

Though new infections remain at a small fraction compared to what the country saw during the height of the pandemic back in 2019, China continues to take aggressive measures to prevent another wave of the disease.

Shijiazhuang, Hebei’s capital, accounted for all but one of new COVID-19 cases in the province reported on Jan. 5. Officials stated that it would ban gatherings and bar non-residents from entering residential compounds in the region. It also shut down important long-distance bus terminal and has begun a mass testing drive.

Cases were reported in Dalian, in Liaoning province. Authorities have barred residents of areas designated as medium or high-risk areas for the disease from leaving the city. Residents who do not live in such areas were dissuaded from taking un important trips out of Dalian.

Local authorities regularly carry out a combination of measures including mass testing, closing schools and restricting travel for those in areas with a cluster of new COVID-19 patients. Chinese customs officials also conduct routine inspections of imported goods to check for traces of the coronavirus.

At the same time, China has tried to reshape the narrative about when and where the pandemic began, with top officials highlighting studies they claim show the disease emerged in multiple regions. Beijing has also rejected accusations of wrongdoing or mishandling of the COVID-19 outbreak in the country.