Arab states may reopen Travel, trade to Qatar within a week: UAE 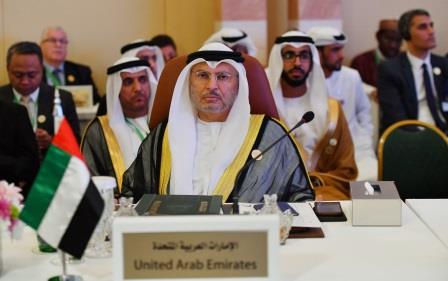 FILE PHOTO: UAE Minister of State for Foreign Affairs Anwar Gargash is seen during preparatory meeting for the GCC, Arab and Islamic summits in Jeddah, Saudi Arabia, May 29, 2019. REUTERS/Waleed Ali

Saudi Arabia, the UAE, Bahrain and Egypt imposed the embargo on Qatar over allegations that it supports terrorism and is getting close to common enemy, Iran. Doha denies the charges and says the boycott aims to curtail its sovereignty.

Saudi Arabia made the announcement at the Gulf summit on Tuesday, with its foreign minister saying Riyadh and its allies would restore all ties with Doha severed in mid-2017.

UAE Minister of State for Foreign Affairs Anwar Gargash told a virtual news conference that measures to be implemented within a week of the agreement “include practical measures of airlines, shipping and trade”.

However, he said, other issues such as restoring full diplomatic relations would take time with differences remaining, including over geopolitical issues such as Turkey and Islamist groups like the Muslim Brotherhood.

“Some issues are easier to fix and some others will take a longer time,” Gargash said. “We have a very good start … but we have issues with rebuilding trust.”

Kuwait and the United States have been mediating in the dispute that Washington says hampers efforts to contain Iran.

Sources stated that the Trump administration and Riyadh had pressed the other boycotting states to sign the deal and that Saudi Arabia would move faster than its allies to restore ties.

The four nations had set Doha 13 conditions to end the boycott, including closing al Jazeera TV, shuttering a Turkish military base, cutting links to the Muslim Brotherhood and downgrading ties with Iran.

Qatar Foreign Minister Sheikh Mohammed bin Abdulrahman Al-Thani told that Doha had agreed to drop legal cases related to the boycott and cooperate on counter-terrorism and “transnational security” but that the deal would not affect Qatar’s relationship with Iran and Turkey.

Gargash pointed out that the main issue with Turkey and Iran was interference in Arab sovereignty and interests and that mending the Gulf rift would foster more “collective agreement on geostrategic issues” despite differences in approaches.