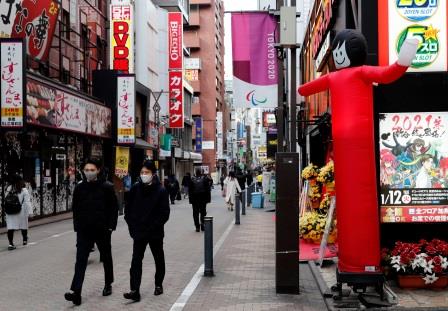 TOKYO (JAPAN) – Prime Minister Yoshihide Suga has declared a one-month state of emergency in the capital, Tokyo, and three neighbouring prefectures on Thursday. The move comes after daily COVID cases surged to a record of more than 7,000.

The government said the emergency would run from Jan. 8 to Feb. 7 in Tokyo and Saitama, Kanagawa and Chiba prefectures, covering about 30% of the country’s population. Restrictions would focus on measures to combat transmission in bars and restaurants, which are cosidered as the main risk areas.

Since the government is trying to limit damage to it’s economy, the curbs are less stringent than those imposed nationwide in April under an emergency that ran to late May.

“The situation has become increasingly troubling nationwide and we have a strong sense of crisis,” Prime Minister Yoshihide Suga told a news conference.

Tokyo in particular has been a constant worry with its tally of positive tests went up to 2,447 on Thursday, from a record of 1,591 the previous day.

Authorities aim to start a vaccination campaign by the end of February.

The emergency goes into force on Friday.

Ahead of the declaration, the Tokyo Metropolitan Government said that exhibitions of the Olympics torch around the capital had been postponed.

Medical experts, however, say they fear the government’s plans might not be enough.

“We may need to think about a state of emergency nationwide,” Toshio Nakagawa, president of the Japan Medical Association, said on Wednesday.