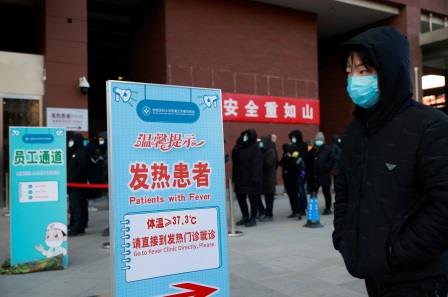 People line up to get a nucleic acid test at a hospital following an outbreak of the coronavirus disease (COVID-19) in Beijing, China January 7, 2021. REUTERS/Thomas Peter

SHANGHAI (CHINA) – The capital and largest city in northern China’s Hebei, which accounted for 51 of the 52 local cases reported by the National Health Commission, barred people from leaving on Thursday. The steps were taken in a bid to curb the spread of the coronavirus as the country reported a record spike in daily infections in more than five months.

In Shijiazhuang, which is home to 11 million people, authorities have launched mass testing drives and banned gatherings. Moreover, people and vehicles from areas of the city considered high-risk were not allowed to leave their district, authorities said.

In the city of Dalian in Liaoning province in China’s northeast, which has reported local infections in recent days, residents in medium or high-risk areas have been barred from leaving the city. Residents in other areas were told to refrain from unnecessary trips out of Dalian.

Authorities in Guangdong province in southern China late on Wednesday reported a patient infected with a more transmissible variant of the coronavirus discovered in South Africa.

The total number of confirmed COVID-19 cases in mainland China since the outbreak first started in the city of Wuhan in late 2019 now stands at 87,278, while the death toll remained unchanged at 4,634.

Arab states may reopen Travel, trade to Qatar within a week: UAE