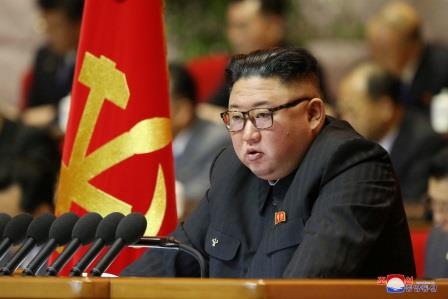 SEOUL (SOUTH KOREA) – Speaking at the Eighth Party Congress, North Korean leader Kim Jong Un said that in order to better defend the country he would expand military capabilities, state media reported on Thursday, during a rare party congress. The eighth party congress being held in Pyongyang is the first since 2016.

The party congress was held amidst a mounting economic crisis in North Korea caused by a self-imposed border lockdown to prevent a coronavirus outbreak, a series of natural disasters and international sanctions over its nuclear weapons programme.

A day after he admitted that previous economic goals had fallen short, Kim spoke of measures to make a “tangible turn in improving the people’s living standard.” To secure a “peaceful environment” for the people and country, Kim called for “placing state defence capabilities on a much higher level, and put forth goals for realizing it.”

Despite announcing a self-declared moratorium on nuclear testing and intercontinental ballistic missile (ICBM) launches from 2018, Kim has called for continued production of nuclear weapons for his arsenal, launched a series of smaller missiles, and disclosed what would be North Korea’s largest ICBM yet at a parade in October.