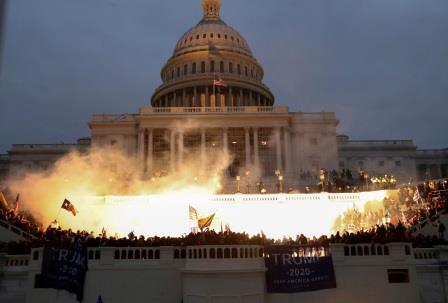 FILE PHOTO: An explosion caused by a police munition is seen while supporters of U.S. President Donald Trump gather in front of the U.S. Capitol Building in Washington, U.S., January 6, 2021. REUTERS/Leah Millis

US – As the riot led by supporters of U.S. President Donald Trump on Wednesday at the U.S. Capitol continues to shock the world, U.S. Capitol Police informed late on Thursday that a police officer has died. The officer named Brian Sicknick has succumbed to injuries sustained during the riots.

“Officer Sicknick was responding to the riots on Wednesday, January 6, 2021, at the U.S. Capitol and was injured while physically engaging with protesters”, the police said in a statement, adding he passed away on Thursday night.