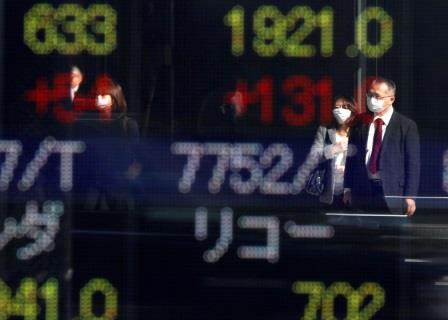 FILE PHOTO: Passersby wearing protective face masks are reflected on a stock quotation board outside a brokerage, amid the coronavirus disease (COVID-19) outbreak, in Tokyo, Japan November 10, 2020. REUTERS/Issei Kato

LONDON/SHANGHAI – Global shares picked up, with Japan’s Nikkei hitting a three-decade peak. Adding to it the U.S. Treasuries extended their steepest sell-off in months on Friday as investors looked beyond rising COVID cases and political unrest in the United States in the hopes for a better economic recovery later in the year.

Europe’s Euro STOXX 600 opened up 0.7%, with Frankfurt’s index up 0.8% after German industrial output and exports rose in November.

Investors were also awaiting U.S. non-farm payrolls data due later in the day to gauge the jobs market’s health.

“Investors are buying the end of an erratic Trump administration and looking forward to something new, which is a Biden presidency and the prospect of a significant spending programme,” said Francois Savary, chief investment officer at Swiss wealth manager Prime Partners.

“People are going for cyclical names and this is driving the market forward but there has to be care taken as this relies on a rebound in the economy in the coming quarters.”

The MSCI world equity index, which tracks shares in almost 50 countries, rose 0.4%, extending its push into record territory and set to close out its best week since late November.

In Asia, South Korea’s Kospi led the way, charging 4% higher, its best daily showing in nearly seven months, while the Nikkei added 2.36%, hitting its highest level since August 1990. The dollar-denominated Nikkei share average rose above its 1989 peak to a record high.

Going against the trend, Chinese blue-chip shares fell 0.3%, retreating from a 13-year high, after index providers MSCI and FTSE Russell said they would cut three Chinese telecom companies from their benchmarks after the close on Friday in response to a U.S. investment ban.

The announcements, which means global funds have one day to adjust billions of dollars of passive investments, wiped a combined $5.6 billion off the value of their Hong Kong-traded shares on Friday.

Hong Kong’s Hang Seng rose 1.1% despite reports that the Trump administration was considering banning U.S. entities from investing in an expanded list of Chinese companies in the waning days of his presidency.

On Thursday, the Dow Jones Industrial Average rose 0.69%, the S&P 500 gained 1.48% and the Nasdaq Composite added 2.56% – with all three indexes finishing at record closing highs.

The gains follow expectations that Democratic control of both U.S. houses of Congress will help the party of President-elect Joe Biden push through larger fiscal stimulus and comes despite political unrest in Washington, DC.

Rising risk appetite weighed on bonds, with the benchmark 10-year bond yield scaling a fresh high since March. Ten-year notes yielded 1.1% on Friday, up from 1.017% on Thursday.

“We’re sure to see a synchronised global recovery in the second half of this year,” said ING analyst Carsten Brzeski.

“Right now, there’s lots of concern about the virus and noise surrounding the vaccine. But we need to take a slightly longer view.”

Cryptocurrency bitcoin fell about 2% to $38,733 after topping $40,000 for the first time on Thursday on high demand from institutional and retail investors. Market watchers have said a pullback is likely following its recent run-up.

Toxic air, leading cause for miscarriages in India