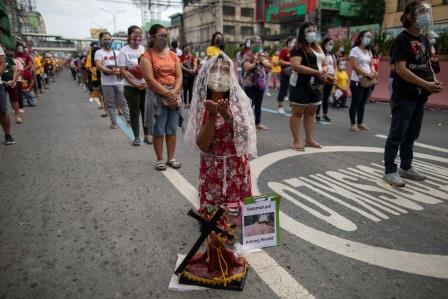 A Catholic devotee wearing face mask and face shield for protection against the coronavirus disease (COVID-19) kneels to pray while attending mass on the feast day of the Black Nazarene, outside Quiapo Church in Manila, Philippines, January 9, 2021. REUTERS/Eloisa Lopez

MANILA (Philippines) – Despite authorities cancelling the annual procession of the life-sized image of the “Black Nazarene”, thousands of Catholic devotees observed physical distancing as they queued for Saturday morning masses in the Philippine capital to celebrate the centuries-old black wooden statue of Jesus Christ believed to bring miracles to the faithful.

The annual procession of the life-sized image of the “Black Nazarene”, is the largest religious event of Philippines and draws millions of devotees in an annual ritual observed for 200 years.

After authorities cancelled the event 5 church leaders organised 15 masses at Manila’s Quiapo church, which houses the life-sized statue, and livestreamed the worship services, pleading for devotees not to flock into the basilica.

“I am not afraid to go here even with the risk of COVID-19 because I have faith in Jesus the Nazarene. Every year, every week I go to church,” Arjay Echon, 29, a supermarket employee and a devotee for seven years, told Reuters.

Echon, wearing face mask and shield while carrying a small replica of the “Black Nazarene”, said he is praying for the pandemic to end.

Police estimated a crowd of nearly 23,000 as of Saturday morning.

Those gathering for the ritual had to fill out a contact tracing form, they were also reminded by volunteers to maintain one-metre physical distancing. Devotees inside the church were disinfected before receiving communion.

About 80% of the country’s 108 million people identify as Roman Catholic, a legacy of hundreds of years as a Spanish colony.

“People were patiently in queue, waiting for their turn to get inside the church,” Father Douglas Badong, parochial vicar, told DZBB radio station.

The statue, which was carved in Mexico was brought to the Philippines in the early 17th century. It is unclear why it turned black.

With more than 483,000 cases and 9,300 deaths, the Philippines has the second-highest COVID-19 cases and casualties in Southeast Asia, behind Indonesia.