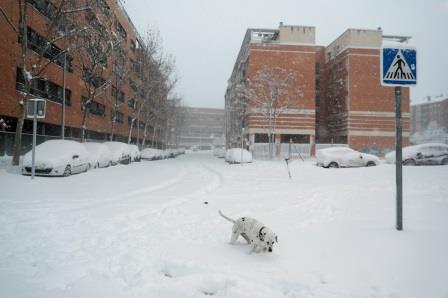 A dog goes deep in snow during a heavy snowfall in Madrid, Spain January 9, 2021. REUTERS/Susana Vera

“Owing to the forecast of snow and for security, Madrid Barajas airport will remain closed throughout Saturday,” Aena, which controls the country’s airports, said in a tweet.

The airport was closed on Friday night after the rare blizzard made flying impossible. At least 50 flights to Madrid, Malaga, Tenerife and Ceuta, a Spanish territory in north Africa, were cancelled, Aena said.

The city council informed that high-speed rail services between Madrid and the southeastern cities of Alicante and Valencia were suspended, as were bus services in Madrid.

Soldiers worked to reach drivers stranded for hours on roads around Madrid.

“We continue the rescue of vehicles on the A4, A5, M40 and M607,” tweeted the Unit for Military Emergencies, which deployed 147 soldiers.

Madrid and four other regions were on red alert on Saturday as more heavy snowfalls were forecast, the State Meteorological Agency said.

Madrid city council has requested people to stay at home.