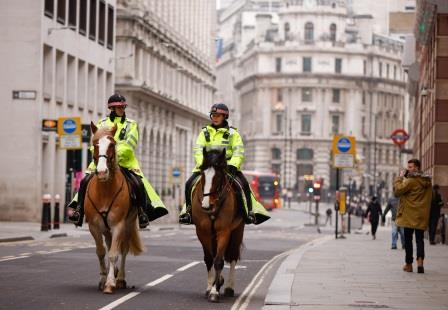 Police officers on horseback patrol the financial district, as the spread of the coronavirus disease (COVID-19) continues, in London, Britain, January 8, 2021. REUTERS/John Sibley

LONDON (UK) – The United Kingdom logged in its highest daily death toll on Friday since the start of the pandemic. Adding to this London has declared a major incident, warning that its hospitals are on the brink.

Prime Minister Boris Johnson shutdown the economy after the highly transmissable new variant of the virus surged across Britain. In a bid to curb the pandemic he is now rushing out vaccines faster than the country’s European neighbours.

Britain has the world’s fifth-highest official death toll from COVID-19 at nearly 80,000, and the 1,325 deaths reported within 28 days of a positive test on Friday surpassed the previous daily record from last April.

“Our hospitals are under more pressure than at any other time since the start of the pandemic, and infection rates across the entire country continue to soar at an alarming rate,” Johnson said in a statement.

“The NHS (National Health Service) is under severe strain and we must take action to protect it, both so our doctors and nurses can continue to save lives and so they can vaccinate as many people as possible as quickly as we can.”

London Mayor Sadiq Khan, from the opposition Labour Party, said that the virus was “out of control” and that hospital beds in the capital would run out within the next few weeks.

“We are declaring a major incident because the threat this virus poses to our city is at crisis point,” Khan said.

The designation of “major incident” is usually reserved for attacks or grave accidents, notably those likely to involve “serious harm, damage, disruption or risk to human life or welfare, essential services, the environment or national security”.

London’s last “major incident” was the Grenfell Tower fire in a high-rise residential block in 2017, when 72 people died.