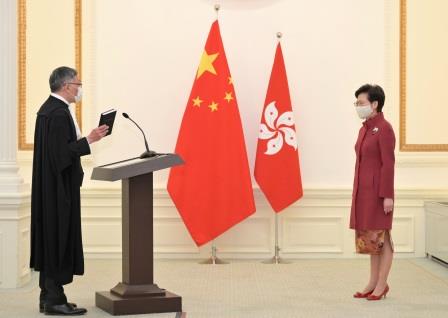 HONG KONG – Hong Kong’s newly appointed judge Andrew Cheung emphasised the importance of the city’s judicial independence and rule of law, on Monday. Just hours after he was sworn in to replace Geoffrey Ma, Cheung described the rule of law as crucial to business confidence and the international reputation of the global business hub.

While some pro-Beijing figures are demanding reviews of the way sentences are meted out and how judges appointed, the first prosecutions under the security law are now moving through the courts.

“An independent judiciary is essential to the rule of law in Hong Kong and the due administration of justice,” Cheung said.

“It is equally crucial to public and business confidence – whether local or overseas – in our judicial system, as well as to the international reputation of Hong Kong.”

That independence, he said, meant in part that the courts “must not be subject to improper extraneous pressure or influence.”

According to the law, anything Beijing regards as subversion, secession, terrorism or colluding with foreign forces is punishable by up to life in prison.

The law also dictates city’s chief executive to take a call on which judges can hear national security cases and allows for suspects to be taken across the border for trial in courts in mainland China.

The independence of Hong Kong’s judiciary is outlined in the city’s Basic Law, the mini-constitution that enshrines its extensive autonomy and freedoms following its handover from British colonial rule to Chinese sovereignty in 1997.

Cheung said those freedoms – including of assembly, speech and due process – were “fundamental” under the Basic Law.

“Society expects the courts and our judges to generously interpret and jealously protect these rights when they are threatened or otherwise interfered with,” he said in remarks to formally open the legal year.