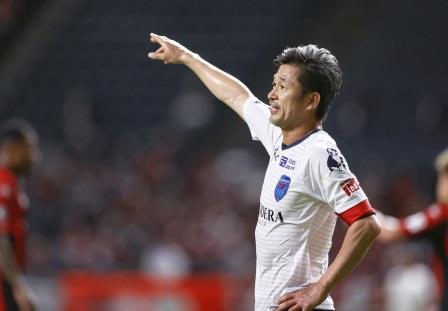 HONG KONG – The oldest scorer in Japanese professional football, Kazuyoshi Miura, is gearing up to continue playing at the age of 54. His club Yokohama FC said that Miura has extended his contract for another season, the club said on Monday. He has joined the club in 2005.

Dubbed ‘King Kazu’ in Japan, Miura, will be playing his 17th season with the club. The top scorer will turn 54 on Feb. 26, a day before the 2021 J League campaign kicks off.

The former Japan striker last scored against Thespakusatsu Gunma in 2017 in Japan’s second division, becoming the oldest player to score in a Japanese professional league game at 50 years and 14 days.

Miura started his career with Santos in Brazil in 1986. The 2021 season will be his 36th as a professional.

The striker won the Asian Cup with Japan in 1992 but missed out on representing his country on their debut appearance at the World Cup finals in France six years later. He scored 55 goals in 89 games for Japan.