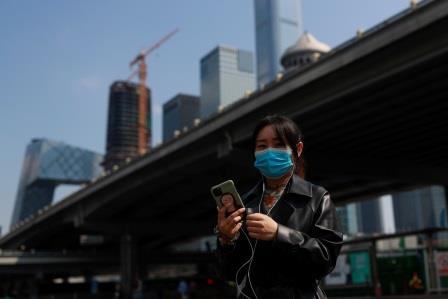 FILE PHOTO: A woman uses her smartphone while walking by Beijing's Central Business District during morning rush hour as the spread of the new coronavirus disease (COVID-19) continues in China, April 17, 2020, REUTERS/Thomas Peter

SHANGHAI (CHINA) – Domestic smartphone shipments fell 20.4% in 2020 compared to the previous year. The number of handsets delivered to consumers dropped to 296 million from 372 million in 2019, stated a government data released on Monday.

According to the state-backed think tank ‘The figures China Academy of Information and Communications (CAICT)’, the impact of the coronavirus crisis on the supply chain and demand. Apart from the ongoing trend for consumers to keep their phones for longer before upgrading to a new model was also found to be the reason behind the drop in sales figures.

In 2019, shipments of smartphones had declined 4% from the previous year, according to CAICT data.

But, in the first half of the year, domestic brands Oppo, Vivo, and Xiaomi Corp each saw steep shipment declines while Huawei, the leading Chinese brand at the high-end, continued to grow market share.

However, later in the year Huawei saw a decline in it’s sales due to trade restrictions imposed by Washington, leading to drop in its supply of critical components. Oppo, Vivo, and Xiaomi have ramped up production in hopes of capturing that share.

Phone makers shipped a total of 25.2 million smartphones to consumers in China in the month of December, marking a 12.8% year-on-year decline, according to CAICT.