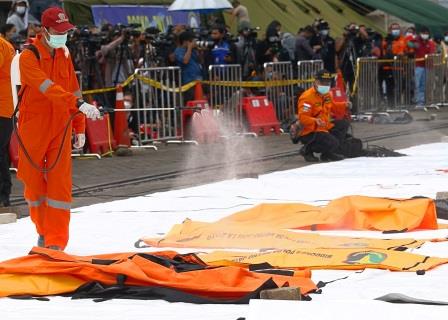 JAKARTA (INDONESIA) – Indonesian authorities have informed that they have located the black boxes of the Sriwijaya Air jet that crashed into the Java sea. It is believed that the plane crashed soon after taking off from Jakarta. Reasons for the crash is still to be ascertained.

“We have located the position of the black boxes, both of them,” said Soerjanto Tjahjono, head of Indonesia’s transport safety committee, on Sunday. Human body parts and pieces of the plane were retrieved.

“Divers will start looking for the black boxes now and hopefully it won’t be long before we get them,” he added.

The Boeing 737-500 with 62 passengers and crew was headed on a domestic flight to Pontianak in West Kalimantan on Saturday before it disappeared from radar screens four minutes after take-off.

Search will continue into the night, a search and rescue official said, but efforts will be limited to sonar scans by boats.

This is the first major aircrash in Indonesia since 189 passengers and crew were killed in 2018 when a Lion Air Boeing 737 Max in 2018 also plunged into the Java Sea soon after take-off from Soekarno-Hatta International Airport.