US removes curbs on ties with Taiwan 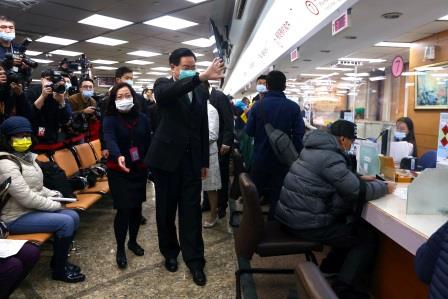 Taiwan's Foreign Minister Joseph Wu waves to the staff behind the counter to apply for a new Taiwanese passport in Taipei, Taiwan, January 11, 2021. REUTERS/Ann Wang

TAIPEI (TAIWAN) – After US lifted curbs on interactions with Taiwan, Foreign Minister Joseph Wu stated that it was a “big thing”. Wu said he welcomes the move as an important push for relations with the US, which is the island’s most important global supporter.

The announcement was made U.S. Secretary of State Mike Pompeo with just days remaining for Democrat Joe Biden to take the office.

This move is expected to heighten Sino-U.S. tension.

“This is a big thing for the elevation of Taiwan-U.S. relations,” Wu told reporters, expressing his “sincere gratitude” to the U.S. government.

“Taiwan-U.S. relations have been elevated to a global partnership. The foreign ministry will not let our guard down and hope to continue to boost the development of Taiwan-U.S. ties.”

Like most countries, the United States has no official ties with Taiwan, but is bound by law to provide it with the means to defend itself. Under President Donald Trump it has ramped up arms sales and sent senior officials to Taipei.

But Pompeo’s decision means, for example, that Taiwan officials will be able to hold meetings at the State Department or White House rather than in non-official locations elsewhere, such as hotels.

The latest development has been flayed by Chinese state media. Widely circulated Global Times tabloid, which belongs to People’s Daily owned by the ruling Communist Party, said Beijing has to send “stern warning” to Taiwan.

“Those on the island of Taiwan must not take for granted that they can seek secession with the help of the last-ditch madness of an administration abandoned by the Americans,” the paper added.

“On the contrary, such madness is very likely to bring them annihilation.”

On Wednesday, The U.S. ambassador to the United Nations, Kelly Craft, will arrive in Taipei for a three-day visit, on Wednesday. China has decried the move. Since Taiwan is not a member of the UN, or most global bodies, because of China’s objections, Craft’s visit is seen as a highly symbolic move.

Craft will be met by both Wu and President Tsai Ing-wen on Thursday. A major topic of discussion during the visit would be ways to promote Taiwan’s international participation said Wu.

Certain circles in Taiwan have expressed concerns regarding Pompeo’s statements and Craft’s visit, where there is a broad cross-party agreement on maintaining strong U.S. ties. Moreover, there have long been worries Trump may sacrifice Taiwan for a deal with China.

Johnny Chiang, the chairman of the main opposition Kuomintang party, which traditionally favours close relations with China, said a key test would be whether Biden’s government maintained Pompeo’s move.

“Let’s not become a bargaining chip in the game between the United States and mainland China,” he said.