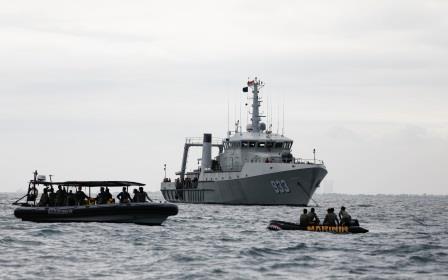 Indonesian navy personnel are seen on rubber boats, with the Indonesian naval warship KRI Rigel (933) in the background, during the search and rescue operation for the Sriwijaya Air flight SJ 182, at the sea off the Jakarta coast, Indonesia, January 12, 2021. REUTERS/Willy Kurniawan

JAKARTA (INDONESIA) – Indonesian authorities have announced that they have retrieved one of the black boxes from the crashed Sriwijaya Air plane during the weekend.

It is yet to be ascertained whether the recovered part is the plane’s flight data recorder or the cockpit voice recorder.

The Boeing 737-500 plane with 62 people on board plunged into the Java Sea on Saturday, four minutes after taking off from Jakarta’s main airport.

Earlier on Tuesday, more human remains were found at the crash site, as well as personal effects such as wallets containing identification cards.

The plane was headed on a domestic flight to Pontianak on Borneo island, about 740 km (460 miles) from Jakarta, before it disappeared from radar screens.