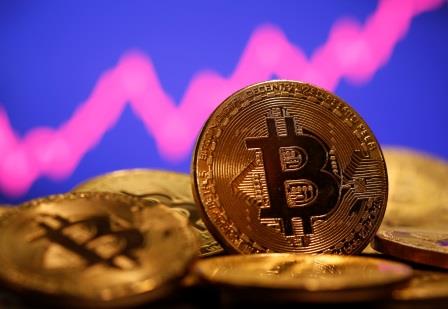 A representation of virtual currency Bitcoin is seen in front of a stock graph in this illustration taken January 8, 2021. REUTERS/Dado Ruvic

NEW YORK (US) – After a record $1.09 billion in the week before Christmas, Crypto is in for a nosedive as it saw just $29 million investment flows into cryptocurrency funds and products in the first week of January.

Nevertheless, total assets under management (AUM) in the industry peaked at $34.4 billion as of Jan. 8. At the end of 2019, the total was just $2 billion, reported asset manager CoinShares.

Though Bitcoin saw a record high of $42,000 last week, it had a major slump of more than 19% on Monday, putting it on track for its biggest one-day drop since March.

“But we are initiated and would like to point out that this was to be expected and that we already saw a near-20% decline earlier last week.”

Inflows into bitcoin investment products totaled $24.3 million in the first week of the year. Ethereum, the second largest cryptocurrency in terms of market capitalization, accounted for $5.3 million, according to the latest available data.

The data showed that investors pumped $15.6 billion into bitcoin products and funds in 2020, while ethereum inflows reached nearly $2.5 billion.

“Bitcoin is still up on the year and the current 22% crash won’t intimidate any of the new institutional money that just hopped onto the crypto bandwagon,” OANDA’s Moya said.

Assets under management in Grayscale, the world’s largest crypto fund, rose to a record $28.2 billion as of last week.

CoinShares, the world’s second largest crypto fund, showed assets under supervision of $3.4 billion. Its XBT Provider line of exchange-traded products hit record trading volumes on Jan. 4 of about $202 million. XBT Provider is a Swedish-based issuer of exchange-traded products listed on Nasdaq Stockholm AB, which is part of Nasdaq Inc and wholly owned by the CoinShares Group.