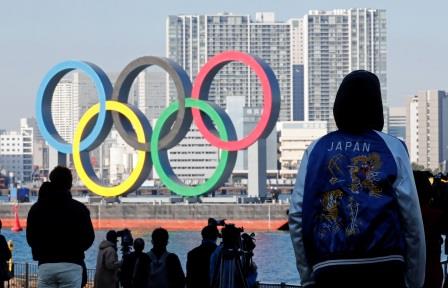 FILE PHOTO: Bystanders watch as giant Olympic rings are reinstalled at the waterfront area at Odaiba Marine Park, after they were temporarily taken down in August for maintenance amid the coronavirus disease (COVID-19) outbreak, in Tokyo, Japan December 1, 2020. REUTERS/Kim Kyung-Hoon

TOKYO (JAPAN) – The head of the Olympics organising committee said on Tuesday, that they have to zero in on a decision as to whether spectators should be allowed inside the venue or not in February or March, depending on how far the COVID risks have dropped.

The Japanese government and the International Olympic Committee made the decision last March to postpone the 2020 Olympics until July 2021 because of the pandemic.

Despite surge in COVID cases and an expansion in state of emergency due to the virus, organisers have stressed they are determined to press ahead with holding the Games this year.

So far, no decision has been made regarding permission of spectators to enter the venue during the Games. A few ticket holders who no longer wish to attend have already applied for refunds.

“I think we will have to make a very difficult decision around February to March,” Tokyo 2020 Organising Committee President Yoshiro Mori said.

A recent poll conducted by a Japanese news agency found that 80% of those surveyed think the Tokyo Games should either be postponed again or cancelled because of rising coronavirus cases.

However, Mori said it was “absolutely impossible” to cancel the Games again, largely because the organising committee would not be able to keep its staff for another year.